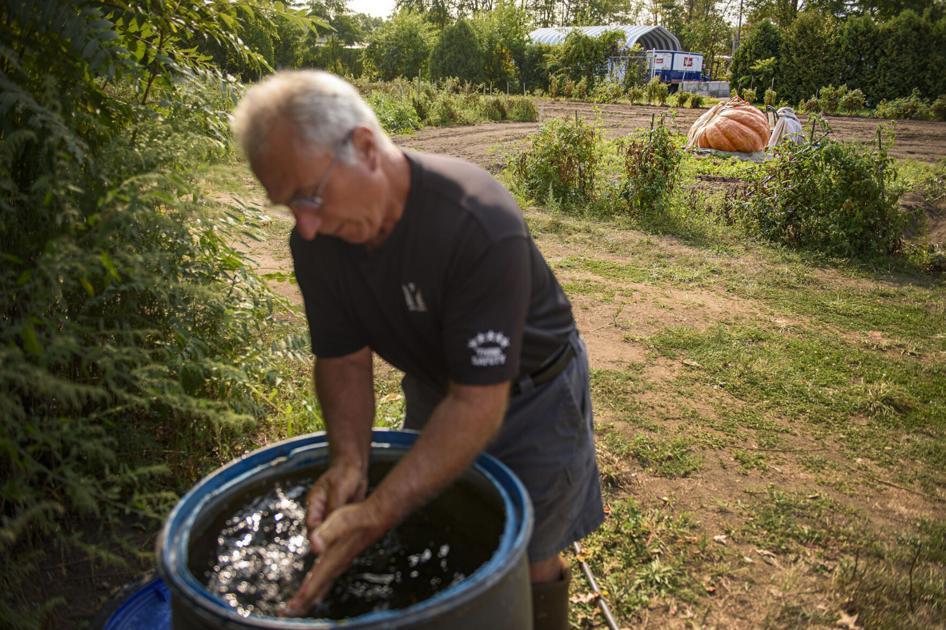 HARTFORD, Conn. — Earlier this year, lifelong Plainville, Conn., resident Gary Vincent planted eight giant pumpkin seeds in an unfenced, uncovered garden plot owned by Plainville’s Our Lady of Mercy Church. Vincent, 70, began growing giant pumpkins in 1981 after his wife brought home five seeds from the Big E fair. The following year he grew a 200-pound pumpkin and a 275-pounder the year after that.

Of the eight seeds he planted in 2020, “How many do you think are left?” Vincent asked before pausing to answer, “zero.”

For Vincent, this year was an especially tough one for pumpkin growing because it brought the added stress of record-breaking heat and humidity, wind-damage from Tropical Storm Isaias. And, with COVID-19 social distancing requirements, many of the fairs that serve as certified weighing stations have been canceled, including Durham and Topsfield.

Vincent’s last remaining 2020 pumpkin now rests on a bed of sand, where he will take an axe to its thick walls, hoping to harvest seeds for next year.

At present, the pumpkin is estimated at 1,457 pounds, which is too small for Vincent to compete with. According to Vincent, Tropical Storm Isaias took out about 60 percent of the plant.

The 29-year-old set a Connecticut record with a 2,294-pound pumpkin and says growing a pumpkin at these weights can require 25 hours a week in the patch. Coaxing root growth, monitoring soil and water health, making sure the wall is thick enough to support the pumpkin’s weight, setting mouse traps and fending off hungry invaders.

“It’s amazing how fragile they are when they get this big,” Noel said.

Vincent, who is a retired Bristol Police officer, says that to be a successful giant-pumpkin grower, “You gotta be retired and you gotta be crazy.”

“I’m down to the last quarter of my life,” Vincent said. “My biggest dream is one of two things, I want to get back the state record and I want to break 2,300. I want to get up to over 2,500, I wanna break the world record.”

At the end of a dirt road in Higganum, there are three giant pumpkins growing in a netted hoop house behind Ryan and Chelsea Cleveland’s house. Each fruit is surrounded by dozens of two-foot tall leaves, each looking like an upturned child-sized umbrella. Wooden planks indicate the narrow path where foot travel is allowed because any damage to the vines and roots transporting up to 100-gallons of water a day can mean precious pounds lost.

Ryan, 36, is considered relatively new to the hobby. He first competed in 2017 with a 605-pound pumpkin. But this year, Ryan may have Connecticut’s largest.

In keeping with a tradition Chelsea says all growers maintain, their pumpkins each have a name, and Mrs. McCleve is expected to weigh more than 2,000 pounds.

On Sept. 26, if Mrs. McCleve stays intact after the strain of being cut from its stem, lifted with a special harness made by Cleveland, and transported by trailer to an East Haddam weigh-in, Ryan and Chelsea will find out for sure.

The East Haddam weigh-in is being held in lieu of the canceled Durham Fair.

Two weeks before the East Haddam weigh-in, a similar event was held at the Putnam home of grower Gene Lariviere. The smallest pumpkin in that contest, grown by Lariviere, came in at 1,151 pounds. The largest pumpkin weighed in at 1,885.5-pounds and was grown by 37 year-old Matthew Dabacco.

Debacco began growing twenty years ago after seeds from a Halloween Jack-o’-Lantern sprouted in his front yard. “If they grow this easy,” he thought then, “I’m going to give it a shot.”

DeBacco says every season growing giant pumpkins is challenging. But this year’s lack of fairs, and their opportunities to show and promote giant pumpkins to newcomers has him missing the “fun part, the showing it.

“I’m constantly missing that.” he said. “The hobby will not survive if you do not have new people coming in.”

As an Amazon Associate I earn from qualifying purchases.