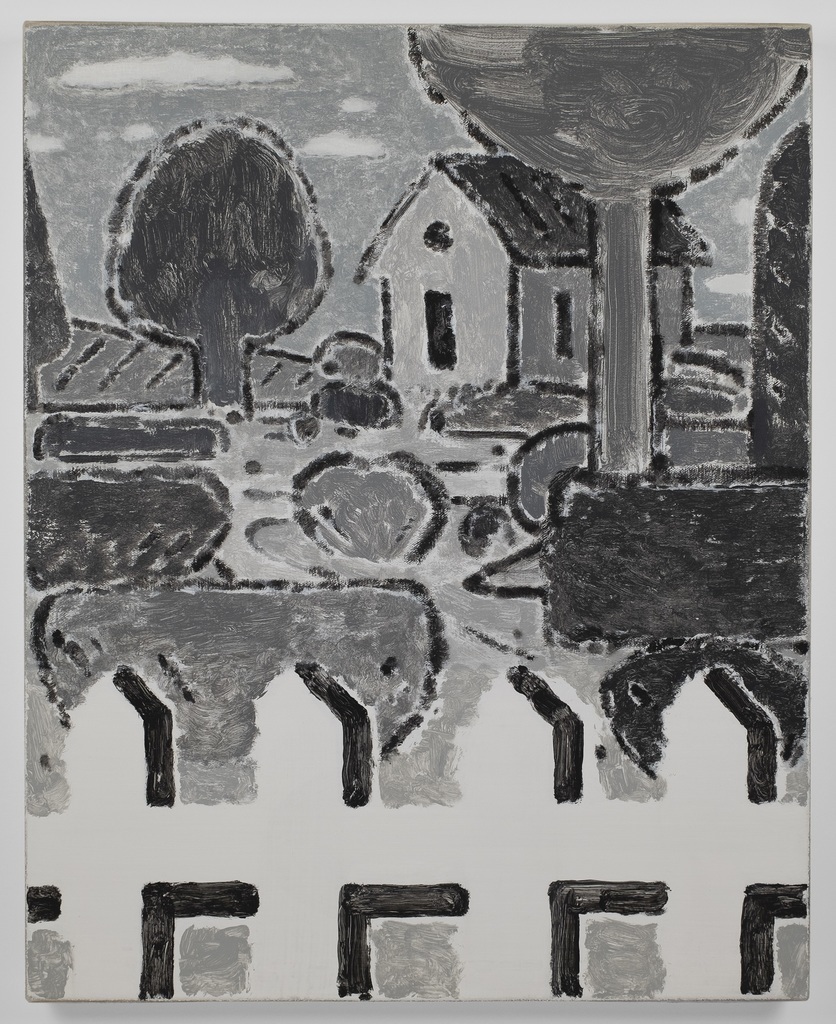 Arts+Leisure is thrilled to announce Home & Garden, an exhibition of recent paintings and drawings by Brian Scott Campbell. Working within the bounds of a tightly defined, yet painterly and expressive visual style, the paintings on display radiate an inner mysticism and profound stillness. Seaside landscapes, country homes, and other bucolic scenes are simplified geometrically, and rendered in a muted palette of predominantly blue and gray hues. Hints of bare canvas appear through Campbell’s thin washes, emphasizing the paintings’ material nature and placing a categorical distance between the viewer and the work as an aesthetic object.
At once weathered and “hand-made”, with several pieces bearing the appearance of aged prints, the works in Home & Garden nonetheless bear a marked softness. In Dockers and For Robert, forms reduced to their simplest geometric foundations maintain a certain fuzziness, as if delineated with a finger rather than a brush. Straight lines seldom appear in Campbell’s work, lending paintings like Mid Summer a hazy, undulating quality accented by his translucent application of paint.
Campbell’s use of flashe, a vinyl based paint that dries in particularly thin layers, captures traces of his hand, preserving a complicated mesh of variable brushstrokes. On full display in Glen, densely clustered stippled brushwork alternates with long, fluid strokes, creating a parallel pictorial drama as different mark-making techniques refract off each other. In other works, Campbell manipulates the viscosity of his paint, creating alternately “wet” and “dry” passages.
As if hovering just beyond our grasp, the paintings in Home & Garden are enigmatic and nebulous, with their flat planes and thickly outlined objects suggestive of a secret ulterior meaning. Though lacking their nervous energy and horror vacui, or avoidance of empty spaces, Campbell’s paintings evoke both Outsider art, as well as referencing the grainy, roughly drawn work of Jean Dubuffet. In a collection of drawings exhibited along with the paintings, quick, energetic lines mark trees, homes, and other elements, offering a glimpse of the paintings stripped of their painterly heft. Set against the light, sparse drawings, Campbell’s extraordinary ability to conjure impressions of volume and weight is amplified, and it is indeed this duality of form and formlessness that is the crux of Home & Garden.